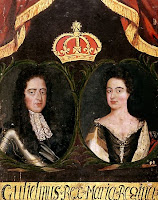 The 1688 Revolution, often referred to as the ‘Glorious Revolution of 1688’, ended the reign of James II and ushered in the reign of William III and Mary II. The 1688 Revolution came at the end of a reign when James II had made it all too clear that he wanted Roman Catholicism reinstalled as the country’s religion. The chronic dislocation of the English Civil War was remembered by many people as was the relative stability of the reign of Charles II. No one was willing to tolerate more years of uncertainty or the possibility of the country being pushed once more into military conflict.
The policies of James II had caused much discontent in both Whig and Tory parties. As a result, leading politicians took it upon themselves to send an ‘Invitation’ to William of Orange inviting the Protestant William to take the throne of the country – along with his wife Mary who was the daughter of James II and granddaughter of Charles I.
William landed at Torbay in in November 1688. James fled to on December 23rd and in January 1689, William called a parliament which passed the necessary legislation that the Revolution required to be successful. The politicians behind the 1688 Revolution saw James II as being the one at fault for destabilising the constitution as it then stood. Led by Danby, they believed that they were merely taking society back to the time when the social status quo that they wanted existed and where the Protestant faith was guaranteed.
The December 1688 Bill of Rights declared that James had abdicated and that the Crown had legally passed to William and Mary and their heirs. The political unity shown in the removal of James from the throne did not last long. Dissention regarding the modus operandi of the new monarch split the previously united group.
There were those who viewed Mary alone as the legal heir to the throne as she was from Stuart blood – the daughter of James II and the granddaughter of Charles I. Despite the number of years that had passed, there were still those who held Charles in high regard as a monarch (though not as an individual). The strict legitimists wanted William named as a regent only.
William, a respected Protestant leader from , would not accept this and stated bluntly that he would return to unless he was given full regal powers. The prospect of a political vacuum was not welcomed by anyone.
There were some Whigs, though few in number, who believed that the people of the country should have the final say in who should be monarch.
The Bill of Rights was blunt in one thing – it forbade the monarch from being a Catholic and from marrying a Catholic.
The Bill of Rights also had a major political bent to it that handed a great deal of power to Parliament. Some historians view it as the start of constitutional monarchy.
Prerogative courts such as the Ecclesiastical Commission were banned; taxation raised through anything else other than Parliament was banned; a standing army raised without Parliament’s consent was banned; the prosecution of anyone petitioning the Crown was also banned. The Bill of Rights also stated that calls for a Parliament should be frequent and that there should be Parliamentary debates free from outside interference
The March 1689 Mutiny Act gave the monarch the legal means to maintain army discipline but Parliament had to support this every six months at a time – though this was later increased to a year.
The Toleration Act (May 1689) did not introduce classic religious toleration but it did exempt Dissenters (except Catholics and Unitarians) from certain laws. To all intents the act allowed freedom of worship but not full citizenship as the Test and Corporation acts were still in force.
In December 1694, the Triennial Act ordered that no Parliament should exceed three years and that no dissolution of Parliament should be longer than three years.
In December 1698, the Civil List was introduced. This provided the Crown with money to pay for its existence - as well as financing extraordinary expenditure such as wars. As war became more and more expensive as time progressed, the Crown came to rely more and more on Parliament for its financial survival.
In June 1701, the Act of Settlement was introduced. The Bill of Rights had ensured that Anne would be the rightful heir after William and Mary – along with her heirs. The Act of Settlement wanted to clarify what would happen if Anne left no heirs, as was the case. The act stated that the Sophia of Hanover and her heirs would succeed Anne. The House of Hanover was Protestant and the act ensured that the Protestant faith would continue after Anne died.
Posted by Prof. Beatriz Crosa at 4:37 AM