FASHION AND FICTION DRESS IN ART AND LITERATURE IN STUART ENGLAND : Book recommended 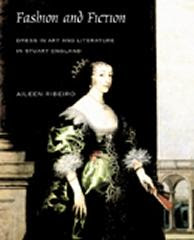 The Stuart period is particularly rich in the variety of dress among the wealtheir classes, ranging from the complex, sometimes 'metaphysical' clothing of the Jacobean elite and the romance of Arcadia at the court of Charles I to the influence of Puritan moral and religious discourses, the extravagance of Restoration fashion and new concepts of gentility and modernity in the early eighteenth century.

Relatively few garments survive from before the eighteenth century, and the history of costume in the preceding centuries therefore has to rely to a great extent on literary and visual evidence. This book, the first of its kind, examines Stuart England through the mirror of dress.

It argues that both artistic and literary sources can be read and decoded for information on dress and on the way it was perceived in a period of immense political, social and cultural change.

Focusing on the rich visual culture of the age, including portraits, engravings, fashion plates and sculpture, and on the many and varied literary sources - poetry, drama, essays, sermons - the distinguished historian of dress, Aileen Ribeiro, creates a fascinating account of Stuart dress and reveals the ways in it reflects and influences society. Supported by a wealth of telling images, she outlines the main narrative of clothing, as well as exploring such themes as court costumes, the masque, fanciful and 'romantic' concepts, the ways in which political and religious ideologies could be expressed in dress, and the importance of London as a fashion centre. This beautiful book will be indispensable to historians of the art and dress of the period as an authoritative and up-to-date account of what people wore and how it related to the country's cultural climate.